By now it’s evident to those who follow me that I am concerned with this century. Unlike others, I fear that we are approaching cataclysmic divides in society, wealth, faith and beyond. This is becoming a world of polarized visions and solutions. It’s my way or the highway, as the saying goes.

Unfortunately, this divide is being aggravated by multiple new factors. Take technology, it is quickly changing how we interact. On a mass scale, social media has revolutionized how governments interact with their population and vice-versa. The 24/7 TV news cycle has changed our relationship with the world. Technology has affected our individual relationships. Have we not all seen the image I’ve included in this article? Have we not all seen a couple sitting, disconnected though only feet apart? Sometimes it’s both parties surfing some useless site, probably Facebooking to be ‘close’ to someone whilst ignoring someone right next to you. (Open parentheses) It reminds me of going to a store, speaking with a clerk and then having their phone ring. What do they do? They pick it up and serve the phone customer. Wait a minute, I’m right here in front of you, I may be on the verge of buying something and you would rather speak to some potential customer and risk having me walk out? (Close parenthesis). 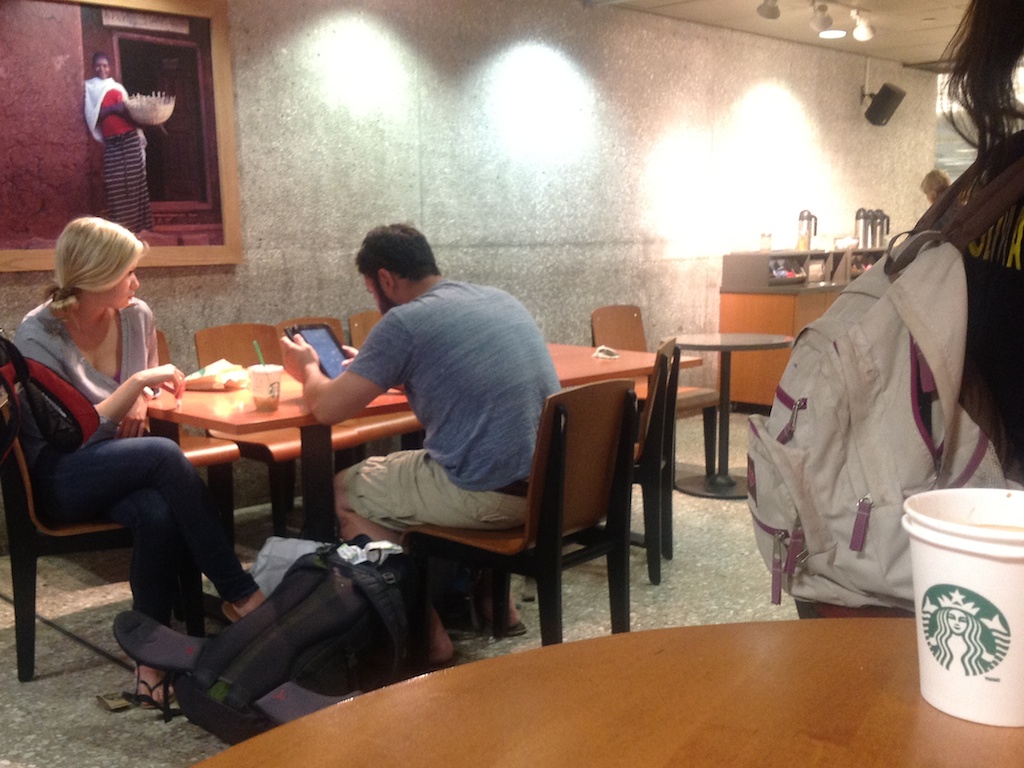 The time has come to reconnect with people that are one-foot away, rather than with those far far away.

So back to my couple. She’s obviously a very attractive young lady. He, frankly, was less so, but who am I to judge? I sat there, only a few feet away, for over an hour. For that entire hour, she tried to caress him, talk to him, even nibble on his ear. What did he do? You guessed it. Nuts!

For a thousand bad reasons, citizens of this dear Earth are no longer speaking. We are not longer solving together. We are no longer acting in each others’ interest. Sure, there have been conflicts and disagreements for centuries, but generally, in one’s own camp, there was collaboration — dictatorships excluded. But we do not live in a dictatorship. We live in a society that aims to form a ‘better union’. We will never create a better union unless we become more interested and conversant with those in our immediate vicinity. Enough said, I think I’ll go and have a conversation with my own wife.