I’ve been complaining about how institutions communicated for years. I’ve been frustrated by the code, the formalism, the double entendres, the misinformation and every other cryptic use of language destined to simultaneously cover their back sides and commit them to nothing.

In some circles, this is called UN-speak. I admit that I have often called it that. But clearly, that is unfair inasmuch as the worst offenders are politicians once elected. I stipulate once elected because prior to the election they attempt to be as simplistic as media will tolerate. Their only goal is to stay on message and so the message must be clear and simple. But once in office, the castle must be protected and what better way of doing so than with the mastery of illusion. 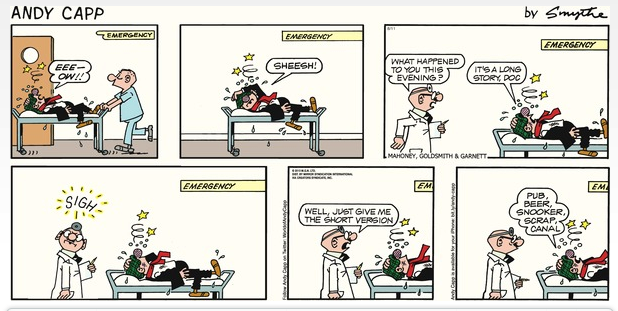 If only our institutions could speak as clearly as Andy!

Anyway, so I came across this Andy Capp comic and I just loved it. Reg Smythe does a great job of elevating Andy, for once. Andy here stands out as my hero for his ability to let us know that there is, indeed, a long story to his wounds but that the short version is likely just as complete.
Someone should really try to break the mold and speak clearly.