Those who know me, know my passion for comics. They can say so much more in one image than pundits can in a day. Regardless of your political affiliation, or maybe because of it, a comic will either confirm your world view, reject it or cause you to think about it.

The image I’ve chosen to best illustrate this is one drawn by Joe Heller. Again, regardless of whether you agree with the substance of it or not, he captures a message using a very well known cliche, that of the hidden part of the iceberg. Here he uses it to make the point that while President Trump is taking all the credit for the state of the economy in his early days in office, according to Heller and others, the real strength of the economic turnaround is rooted in the Obama years from 2009 to 2016. 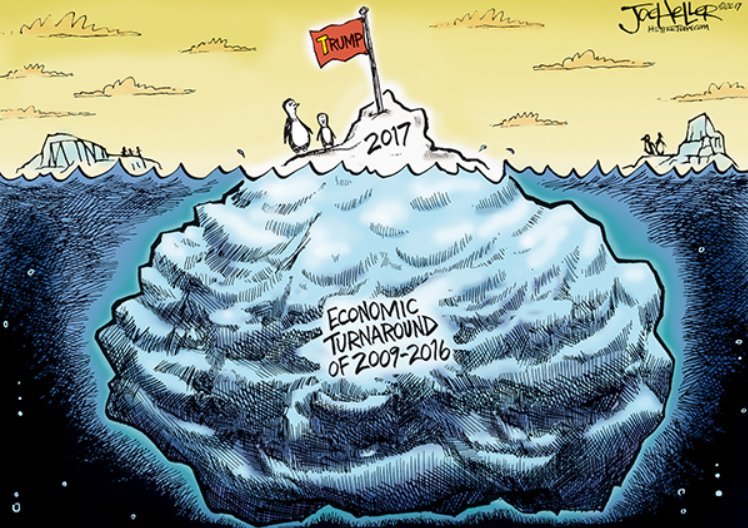 As communicators, we must never underestimate the power of the pencil. Indeed, I have a high school friend, Mike Cucurullo, whose core business is to draw illustrations/cartoons for lawyers presenting pre-trial arguments. His illustrations have helped many to settle out of court.

There is one caveat to cartoons, they tend to be culturally relevant or irrelevant, depending… Cartoonists often present their message using a cultural reference; the iceberg one is a case in point. Many around the world, either because they are less erudite or because they do not live in proximity to icebergs, are not necessarily aware of the iceberg concept. To them, this cartoon is meaningless. Cartoonist beware, if you are trying to reach a given target audience, make sure they understand the underlying reference.

Note that comics are not only effective for political lampooning. They are just as effective in the non-profit or corporate realm. Indeed, and perhaps incredibly, I remember a certain armed forces using cartoons for their safety instructions. This was not illustration, it was bona fide cartooning with humor and all.

I really love cartoons and caricatures…